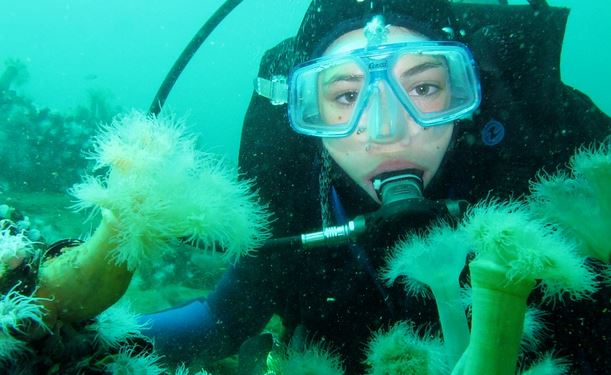 In case the reader of this page has comments, questions etc, I’m happy to receive them
by e-mail or web form.

1. Nitrox? EANx? Enriched air?
2. History of nitrox diving
3. Is nitrox safer than regular air?
4. Myths
5. Why should one dive with nitrox?
6. How much does it cost, where do I get it and who can dive with nitrox?

Enriched air oxygen means a nitrox mix which has more oxygen than air has, so then the mix has 22-99% of oxygen. Enriched air nitrox has also shorter name, EANx, where x is the percentage of oxygen, ie. EAN40 (40% oxygen in the mix). Also EANx40 label is used sometimes (the letter “x” is preserved in the label). Usually people mean EANx when they say “nitrox”, and so do I further here.
However, it is important to the relations of enriched air nitrox and nitrox, because nitrox can also be “hypoxic” mixture containg less oxygen than air! Then we say that the mix is hypoxic, ie. it has less oxygen than 21%. Hyperoxic nitrox is EANx, and normoxic nitrox is basically air, 21% of oxygen and 79% of nitrogen. Hypoxic mixtures are not recreational diving, but air and EANx usually are. For more information about different gases, take a look at http://techdiver.ws/exotic_gases.shtml.

In about the year 1890 scientics discovered to benefits of enriched air in diving in theory. The first real mass diving tests were conducted during the World War I and a little before. During the WW II it was used much more, and the first open circuit EANx equipment were used.

International Association of Nitrox and Technical Divers (IANTD) bas established in the year 1985 (USA) and IANTD UK in 1992 (Europe). ANDI and TDI were also quickly in markets.

In 1995 PADI (Professional Association of Diving Instructors) took nitrox training as a part of it’s training program, and the course certifies diver to dive nitrox dives within the recreational limits and with blends of 22%-40% of oxygen.

3. Is nitrox safer than regular air?

This is one of the most popular myths regarding nitrox diving. People usually refer the avoidance of DCS (decompression sickness) when they claim EANx to be safer than air.

Let’s take a look at the diving accident statistics! DAN (Divers Alert Network) has statistics of DCS cases in the USA, which is based on DEMA/NUADC and PADI New Diver Benchmark reports. According to them, the probability to get DCS by air diving is about 0.004% (1 to 25000). Based on this number, and on the PADI Undersea Journal 3/97 magazine, the probability to get DCS by air diving even once during 500 dives is 1.98% (1 to 50). The risk is 1.49% in nitrox diving in same amount of dives. So… so far the difference is marginal, even though nitrox seems to be a bit safer.

But an accident doesn’t have to be DCS only, and when diving with nitrox there are several other concerns too that air diving doesn’t have. Gas blending, analyzing errors, oxygen clean equipments, CNS clock etc. may also be a source of accident. In this point I have to say that nitrox diving is not dangerous when done right, but these points have to be counted when people talk about safety. So nitrox diving is safe, but not safer than air, generally speaking.

Besides the safety myth above, there are several myths regarding nitrox diving:

People who don’t know much about nitrox think sometimes that it is used for deeper dives. Well, it is not, but it is mostly used on mid deep dives, ranging from 20-40 meters (~60-130 feet). The more oxygen you have in the mix, the shallower will the MOD (maximum operating depth) be.

It is also a common misunderstanding to think that it causes less narcosis. This would be due the fact that it has less narcotic nitrogen. But oxygen is also narcotic, and according to some references it is maybe as narcotic than nitrogen, and together with nitrogen it could be even more narcotic (Bennett 1993, Inert Gas Narcosis, the Physiology and Medicine of Diving, 4th edition)!

There are also no advantage in rare embolia cases (The Undersea Journal 3/97).

5. Why should one dive with nitrox?

Another example: Two 25 min dives to 25 meters (83 feet). The surface time will be at least 2 h 19 min (in no decompression limits), but with EAN40 you don’t even have to have the surface time! (PADI diving tables)

EANx is also used in technical and commercial diving to shorten the decompression times.

6. How much does it cost, where do I get it and who can dive with nitrox?

Nowadays nitrox doesn’t cost much more than air, maybe 1.5 times as much roughly (Sometimes less, sometimes more. Ask for your local diving center.). Several diving centers fills nitrox, but you have to be certified first.

Have a good nitrox dives!